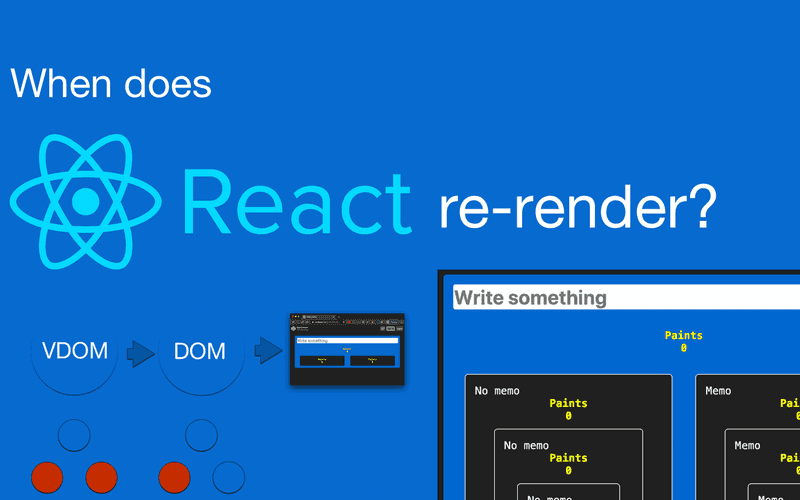 When looking into React's render performance, there are a few terms and concepts that can be hard to understand. It wasn't 100% clear to me what a VDOM was or how React decides to re-render components for quite some time.

In the first part of this article, I'll explain the most important concepts about rendering in React and how React decides to re-render a given component.

In the last section of this article, I'll show you what you can do to optimize the render performance of your React application.

If, after reading this, you have open questions or find an error, feel free to leave a comment or email me.

Rendering is a term that can be understood on different levels of abstraction. Depending on the context, it has a slightly different meaning. In any case, ultimately, it describes the process of generating an image.

In plain English, this means that the DOM represents what you see on your screen when you open a website, expressed through the markup language HTML.

Browsers allow the JavaScript language to modify the DOM through an API: The globally available document represents that state of the HTML DOM and provides us with functions to modify it.

Then we have the Virtual DOM (or VDOM) of React, another abstraction layer on top of that. It consists of your React application's elements.

When the VDOM gets updated, React compares it to to a previous snapshot of the VDOM and then only updates what has changed in the real DOM. If nothing changed, the real DOM wouldn't be updated at all. This process of comparing the old VDOM with the new one is called diffing.

When we talk about renders in React, we really talk about the execution of the render function, which doesn't always imply an update of the UI.

This translates to having the render function being called three times, but actual DOM modifications only happen once in the Tile component that displays the message:

The red dots again represent renders.
In React, this means calling the render function. In the real DOM, this means re-painting the UI.

The good news is that you don't have to worry too much about the performance bottlenecks of UI re-draws. React already optimizes this for you.

The first point is arguably not that important since React manages to calculate the difference quite efficiently. The danger lies in the code that you wrote is being executed repeatedly on every React render.

In the example above, we have a small component tree. But imagine what happens if each node has more children, and these again might have child components. We'll see how we can optimize this.

If you want to see native re-renders, you can do so in the Chrome DevTools, under the three-dot menu on the right -> More tools -> Rendering -> Paint flashing.

Now click through your application with first the React re-renders highlighted, and then the native renders, and you'll see how much React optimizes native rendering.

Changing the state means that React triggers an update when we call the setState function (in React hooks, you would use useState). This doesn't only mean the component's render function will be called, but also that all its subsequent child components will re-render, regardless of whether their props have changed or not.

If your application is poorly structured, you might be running a lot more JavaScript than you expected because updating the parent node implies running the render function of all children.

In the last part of the article, we will see a few tips that help you to prevent this kind of overhead.

Why doesn't my React component update when its props change?

There are two common reasons why React might not update a component even though its props have changed:

As we already saw before, React re-renders a component when you call the setState function to change the state (or the provided function from the useState hook in function components).

As a result, the child components only update when the parent component's state changes with one of those functions.

Directly mutating the props object is not allowed since this won't trigger any changes, and React doesn't notice the changes.

Instead of changing the props like this, you need to change the state in the parent component.

It's important to change the state with the corresponding React functions. You can find the Codepen here.

Note how I update the state using setUser, which is the function I get from React.useState. The equivalent to this in class components would be this.setState.

Force a React component to rerender

In the two years that I've been working with React professionally, I've never come to a point where I needed to force a re-render. I encourage you to read the article from the beginning if that's what you're here for because usually there's a better way of dealing with React components that aren't updating.

However, if you absolutely need to force an update, you can do so with the following methods:

This one is the most obvious one. In React class components, you can force a re-render by calling this function:

Force an update in React hooks

In React hooks, the forceUpdate function isn't available. You can force an update without altering the components state with React.useState like this:

I got this one from StackOverflow. You'll probably never need it.

The only change I made was to move code that handles the state into a seperate component:

In this article, I explain component composition more in detail and how it can help improve performance.